We've been so busy working on the Brewzer App, that we completely missed Squareflo's 15th birthday on May 5th, 2020.

To be honest, when I started making a living as a web designer in Regina, I would never have thought that I would one day be able to claim the fact that I did ANYTHING for 15 years, let alone operate a business. If I had known Squareflo would one day become a legitimate business, I would have chosen a different name.

I often get asked why I named the business Squareflo. For those of you who don't know, back in 2000 I was studying multimedia at City Varsity in Cape Town. One of my assignments was to design a font, and I had to come up with a name for it. The name "Squareflo" came to me one afternoon while toking a bit of "The Devil's Lettuce".

I imagined the internet as a huge ocean of pixels, little squares, flowing around in currents of digital information... know what I mean? Clearly, I had no idea how the internet works. Come to think of it, I still have no idea how it works... I digress. That's how I came up with the name for the first (and only) typeface I ever designed.

I later used Squareflo as my MSN messenger username. Who remembers messenger? When the day came for me to name my "business", I just went with the first name that popped into my head.

After two years at City Varsity, I moved to Canada and then spent more than 3 years honing my craft, mainly by redesigning my online portfolio every week. And, I designed the odd site for a friend.

I was in Canada on a student visa, unable to work or charge for my services. When I finally became a landed immigrant, in my third year studying Film at the University of Regina, I told myself "I'm done designing websites. I'm never sitting behind a computer again. I'm going to be a documentary filmmaker and travel the world". I deleted my portfolio, shut down my computer, and went to work.

At that stage, I had a nice part-time job working, legally, in the Film Department's Equipment room. I was quite content cleaning and inspecting camera gear until my graduation day. Once I graduated, I would head out into the world and start filming. That was the plan.

Literally, on the same day I decided to quit designing websites, a professor walked into the equipment room where I was working, and asked Joe (my boss), if he knew a web designer. Joe pointed at me, and the rest is history.

My first "paid" design job was for an interesting project called Making It Like A Man; an art exhibition, film festival, and lectures all rolled into one big multi-disciplinary conference about masculinity in Canada. I created a brand, website, billboards, brochures, you-name-it! All for $400, which, at the time, I felt was too much to charge. When my client asked who to make the cheque out to, I'm fairly certain I said: "Make it out to 'Squareflo', without a 'w' at the end."

Shortly after the conference took place, I got hired to do some work for another, super interesting, multi-disciplinary art project held out at the Claybank Brick factory. Around this time I met a talented programmer who went by the name Max Mike. We collaborated on the Claybank project's site, which included a partial CMS, that he developed. Mike later worked for Squareflo for a few years and developed our first CMS.

Right around the time, we worked on the Claybank project I met, and collaborated with an ambitious programmer, originally from Bosnia, named Zlatan. He had just started a web design company called Look Matters Inc. The "Inc." part really impressed me. We built a couple of nice sites powered by Joomla, and I eventually learned to love database-driven websites.

Eventually, Zlatan and I set off in different directions. The engineer/programmer ended up running a successful advertising agency. Me, the soon to be traveling documentary filmmaker, faced with web design projects falling in my lap every few weeks, decided it would best, not to look a gift horse in the mouth.

I decided to forget about becoming a documentary filmmaker, and instead, try to get a web design business off the ground in Regina.

I had projects coming my way and the plan was simple: Do a good job, and don't charge too much, and the projects should keep rolling in based on referral.

I didn't see a need to advertise.

But then, my dad (a doctor, who knows nothing about advertising) said something like: "You have to always advertise your business, even if you are busy. Coke-A-Cola doesn't need to advertise, but they do! And that, is why they are so successful."

What my dad said made sense to me. What I did with this information, is really crazy and directly lead to the business(es) we have today.

In early 2005, I was nearing the end of my degree, ready to officially launch a web design business, and thanks to my dad, convinced that a legitimate business should always be advertising itself, instead of just relying on word-of-mouth referrals.

A few years earlier I was living, and studying in Cape Town, where Postcard Advertising was a popular, non-traditional form of advertising! Racks filled with clever ads disguised as "free postcards" were all over the city, in all the coolest cafes. Witty postcard ads by leading brands could be found, stuck up on fridges in every hip household in the city.

Somehow it made sense at the time 🤦

If you have ever seen a postcard display rack, you'll agree that one would quite a bit of money to start a postcard advertising business, with racks all over the city. Wholesale postcard racks were nowhere to be bought in Regina. Even if they were available, I had no money, because I did websites (incl. full branding package, print materials, etc.) for $400 at the time. Did I give up? No. Should I have given up, and just got a nine to five job like everyone else? Probably.

In 2005, my younger brother, Tim, was working in Calgary. He had just graduated from SIAST, where he studied Water Resource Engineering. To this day I don't know exactly what that means. All I know is, according to some tests Tim ran, Regina's tap water is apparently better than filtered water. If you don't believe me, ask Tim yourself. He will gladly tell you about the 70-page report he wrote on the matter.

I gave Tim a call one day and explained what postcard advertising was (since he had no idea), and asked for advice on how I could build my racks (because there is nothing he can't do). Tim drew up a plan and mailed it to me. The day his sketch arrived, as I reached into the mailbox, his truck rolled into my driveway. Tim had quit his job and moved back to Regina to help me build the racks and start-up "Flo Cards", Regina's first, and only postcard advertising company (as far as we know).

That day we became business partners and decided we need to incorporate Squareflo, the parent company of Flo Cards. On May 5th, 2005 Squareflo New Media Inc. was born. Since then there has never been a dull moment.

The next year Flo Cards fizzled away, but it led to us started a printing division which eventually led us to create FloPrint.com, which Tim manages to this day, and has been voted Best Printing Service in Regina, every year since Prairie Dog Magazine's poll included a category for printing services.

Anyhoo, that's where the name comes from, and how Squareflo started.

Over the years we have had the privilege and pleasure to work with, and for, some amazing people. Too many to name here. I would need to write a hundred more posts just to do cover some of the highlights... 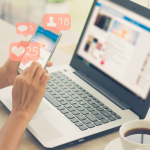 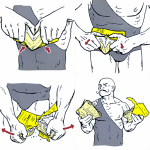 Why does the "yellow pages" still exists, in printed form? 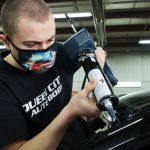